One thing I mentioned in the previous post was that that the height of structures designed according to the design I described really would tend to be larger than their breadth. I will show the math behind that in this post.

In order to do so, I will start off with a very simplistic model for the cost of the structure: 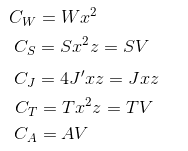 The constants W, S, J’, J, T, and A are constants of proportionality describing the cost per unit of counterweight, compressive structure, pressure jacket, tension cables, and additional costs respectively. All assume a constant internal pressure driven by physiological needs.

The pressure jacket refers to the curved metal structures and framing support members that contain pressure on the outer wall. Cost can be described as being proportional to the external area of the vertical walls of the structure, perimeter times height, 4xz. By introducing a constant J 4 times larger than the initial constant J’, we can simplify the expression to xz.

The additional cost term is a placeholder and is assumed to be proportional to the internal volume of the structure.

Plugging in the expansion of each term and dividing by the volume, x2z, we can determine the cost per volume of the structure as follows:

Naturally we want this C/v value to be as low as possible. We can determine by intuition that the optimum lies somewhere in the middle, rather than at an extreme, and therefore we can determine the answer through differentiation. The optimum is the place where the price per volume remains the same as you modify the aspect ratio of the structure while holding the internal volume constant.

Each of these will, when evaluated and solved, provide the same correct answer:

It’s worth mentioning “cost” is, both in general and in this specific case, a pretty complicated thing to talk about. Construction costs can vary widely for similar projects, even within the same country, depending on all sorts of technical and social factors.

As an example, thinking in the abstract: What is the cost of one unit of iron ore, energy, capital (in the form of machines), and labor on Earth? And how will circumstances on Mars change the relative costs of those inputs (and other important inputs) as compared to Earth?

Even comparing between countries on Earth can be complicated. This report on the relative sizes of the economies of the United States and the Soviet Union in the latter half of the Cold War shows how complicated the comparisons can get, even in two developed countries of similar size, at the same time, with similar resource availability.

All this is to say that it would be inappropriate to try to quantify the optimal ratio of height to width. Instead, I will simply make general observations and look at Earth’s costs for reference.

I will speak at greater length on the construction of each element in a later post. Schematically, the tensile jacket is made from stacked layers of steel half-pipe, attached to a frame with sealant to contain internal air. Assuming a typical strength of plain carbon steel of 300 MPa, a safety factor of 5, and each layer being 3 m tall, this will require just 50 kg of steel per square meter or 200 kg per four square meters (more material of some kind will likely be required to reduce the potential for puncture).

The counterweight is made from some bulk material (concrete, or sand, or gravel) contained within a large frame. A 50 kPa internal pressure with a 5% counterweight overload requires 14 tonnes of material per square meter of counterweight.

It does not require much imagination or analysis to believe that 200 kg of formed steel and structure costs less than 14 tonnes of concrete and structure. It is this basic truth, that W > J, that drives the buildings towards more height and less breadth.

One thought on “Construction on Mars, Part 2, Appendix: Height”