I’m going to try to start publishing weekly posts on here where I work through interesting problems in engineering design for outer space. This is the first post in a series on construction in space. In this post I will describe the design requirements and assessment criteria.

Housing is recognized on Earth to be a basic human need. This is true despite Earth’s breathable air and generally mild temperatures. Nowhere in the known universe is as habitable as Earth, so indoor space is fundamental. In this series, I’m going to look into architectures and designs for the settlement phase, specifically on Mars, when hundreds of people or more are living on-planet and most things are built locally, rather than imported from Earth.

Buildings on Earth are compressive structures, whose most significant structural demand is to support the weight of the building itself and the things inside it against gravity. A rule of thumb is that a single-story single-family home has a mass of 1000 kg/m2, with an additional 375 kg/m2 for each additional floor. The original World Trade Centers weighed 450,000,000 kg each, with a footprint of 4000 m2 on each side and 110 floors, suggests a mass of around 1000 kg/m2 per floor.

Schematic diagram of the load forces on a structure

Buildings on Earth are, in general, built by digging a hole for the foundation and basement, then building and enclosing the structure. Typically structures are made from wood, steel, concrete, stone, or brick (depending on size, purpose, aesthetic preference, and relative costs), with non-structural walls whose functions are simple enclosure and thermal insulation.

In this sense, terran construction practices are irrelevant. The external pressure on Mars is very close to zero, and the internal pressure needs to be breathable: 50 kPa or higher, probably. By comparison, 1000 kg/m2 per floor corresponds to 10 kPa per floor under Earth gravity: The upwards and outwards internal pressure force of a building in space corresponds to 5 floors worth of downwards weight for a terran skyscraper, and 11 floors at the weight of a typical single-family house. 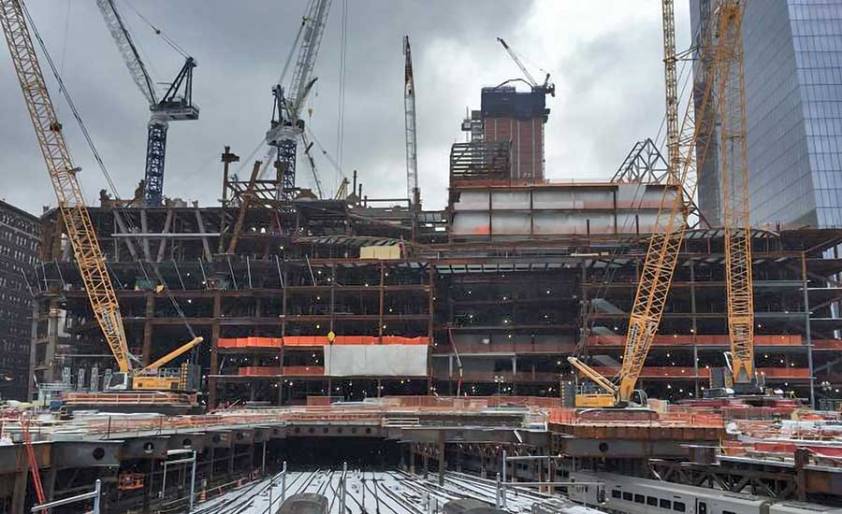 The Hudson Yards development under construction on W. 34th St in Manhattan

This is what I will call the First Rule of Space Construction:

The fundamental structural load on any pressurized structure in space is the outwards force of the internal pressure.

Another major consideration not present on Earth is radiation. Opinions vary about whether this is a major or minor consideration, but it is desirable to have as much shielding mass as practicable to minimize exposure.

In addition to these two specific considerations, I want to bring up three general engineering principles that are almost universally applicable:

No matter how strong and redundant your design, all things fail eventually, sometimes unexpectedly. For something so critically life-sustaining as a building, the failure mode matters. The worst possibility is explosive decompression with no warning: Everyone inside the building will die. In the absolute worst case there may even be cascading damages to neighboring structures, like when one single balloon popping causes a whole bunch of them to burst.

It would be more ideal for failure to be of the sort that is visible but not catastrophic: One strut fails and neighboring members take up the load; the failure is reported or observed in the course of regular inspections, then repaired. Alternatively, rather than fracture, the structure develops a leak which is audible, pluggable, and fixable.

One example of a pressure vessel is the propane tank people buy to fuel their barbecue grill. You might imagine building a structure that is essentially a giant propane tank: A single, large, curved piece of metal, perhaps welded together at the seams, perhaps partly or completely buried.

The logistics of building such a structure suggest substantial problems. Welding is expensive, for starters, and having a structure that is entirely welded is going to be expensive, perhaps unnecessarily so. Plus, manufacturing facilities for metal forming will need to be indoors to allow people to work. There is a limit to how big an airlock can feasibly be built, and no structure could be built which is larger than the structure it was built inside.

This is where the best practices from Earth do seem to be universal: Design for Manufacture would mean that the construction process is one of assembly, in which mass-produced components, each as similar to the other as possible are assembled into a single structure.

Finally, the example of a propane tank, which is curved because curved structures are necessary to contain pressure, illustrates another important design criterion. As all of us who have inhabited buildings know, straight walls are a better use of space than curved ones, and the ideal shape for a building is a rectangle, or at least a shape made from straight lines and right angles.

What I’m getting at is that the structure needs to be functional, and useful as a building. It needs to integrate as well as possible with the built environment of the settlement.

So here are the six criteria, developed in this post, for thinking about and evaluating construction plans for Mars:

I will present a concept which meets all six criteria in part two of this series.

This is the first post in a series.  The next post is Construction on Mars, Part Two: Design, Details, and Evaluation.

2 thoughts on “Construction on Mars, Part One: General Principles and Design Assessment Criteria”