Happy late Festivus! I’m mad as hell at Gov. Andrew Cuomo and you’re gonna hear about it, because you should be at least as pissed off as I am.
Earlier today the governor of the great State of New York announced that the L train shutdown (which had been expected to last 15 months) would not be happening. To explain why this seemingly good news is so infuriating, I will start with a timeline of events. It’s long so you can scroll past if you like for conclusions at the bottom. 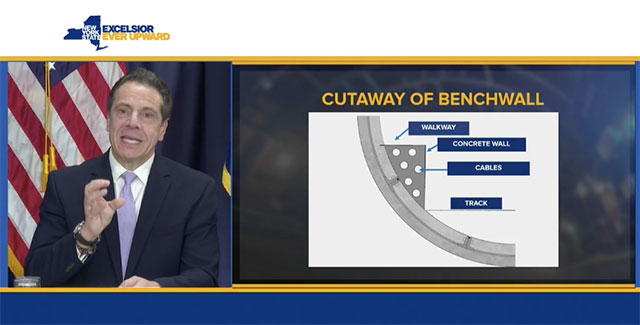 MARCH 25TH, 2009: Facing a $1.2 billion budget shortfall in the depths of the Great Recession, the MTA enacts draconian “Doomsday Cuts” to subway and bus service. 2 subway routes and 52 bus routes are eliminated, 2 more routes are shortened, nearly 1000 MTA employees are laid off, and fares rise by 13%.
NOVEMBER 2, 2010: Running on a platform of responsible government, transparency, and efficient public services (if you can believe that), Andrew Cuomo wins 63% of the vote and is elected to be governor of the greatest of these United States. He holds supreme executive authority over its 20 million citizens, including the MTA. He takes office early in 2011.
OCTOBER 29TH, 2012: Hurricane Sandy makes landfall in the United States, killing 157 people and causing $68 billion in damage, second at the time only to Katrina. There is damage from flooding, wind, and fire across the 5 boroughs and beyond. The city that never sleeps grinds to a halt. 2 million New Yorkers have no power, 20,000 flights are cancelled, no Amtraks run, there is no water in some places, and gas stations have no gas. Every tunnel under the East River (whether for Subway, car, or LIRR) floods with corrosive East River saltwater along with the Holland Tunnel and the Hudson River train tunnels. The subway and PATH don’t run at all for two days. LIRR, NJ Transit, and Metro North are down for a week.
NOVEMBER, 2012: Cuomo receives national attention, praise, and a bump in approval ratings for his bipartisan efforts (alongside NJ Governor Chris Christie and President Barack Obama). He basks in the attention.
JANUARY 29TH, 2013: Congress passes the Disaster Relief Appropriations Act of 2013, authorizing $60 billion in emergency recovery spending.
MARCH 3, 2013: Subway fares increase by 11%.
JULY THRU DECEMBER 2013: The IND Crosstown Line (G train) closes intermittently for repairs.
AUGUST 2ND, 2013: The Montague St. (R train between Manhattan and Brooklyn) tunnel closes entirely to train traffic for repairs. The tunnel remains closed for over 13 months and reopens on September 15th, 2014.
JULY 25TH, 2014: The IND Crosstown Line closes entirely to train traffic for five weeks and reopens on September 2nd, 2014.
SEPTEMBER 9TH, 2014: Andrew Cuomo receives 63% of the vote in the Democratic Primary for Governor, with Zephyr Teachout (the most incredible lady in New York State Politics) surprising everyone by garnering 33% against him.
NOVEMBER 4TH, 2014: Andrew Cuomo wins reelection with 54% of the vote and will remain governor of New York (and remains in charge of the MTA)
MARCH 22, 2015: Subway fares increase 10%
JANUARY 2016: The MTA notifies the public that due to damage caused by Hurricane Sandy, it is necessary to do extensive repairs on the tunnel which will require an 18-month shutdown.
JANUARY 1, 2017: Andrew Cuomo, who has run the MTA since 2011, takes credit for the opening of the opening of a Second Avenue Subway on the Upper East Side.
APRIL 3, 2017: The MTA announces that the shutdown has been shortened to 15 months.
2017: Increasingly bad subway and bus service prompts an outcry from New Yorkers. Andrew Cuomo, who has run the MTA since 2011, blames the mayor.
JUNE 29TH, 2017: Governor Andrew Cuomo, who has run the MTA since 2011, declares a state of emergency on the Subway over poor service.
DECEMBER 2017: After over almost two years of study and public comment, the MTA releases full plans for a 15-month L Shutdown and mitigation/transportation options. Andrew Cuomo, who has run the MTA since 2011, does nothing.
2018: The MTA continues working on plans for the shutdown. Andrew Cuomo, who has run the MTA since 2011, does nothing. The shutdown is scheduled to begin in April of 2019.
NOVEMBER 2018: After a stiff primary challenge by Cynthia Nixon in a campaign focused on the Subways, Andrew Cuomo wins reelection to his third term with 60% of the vote.
DECEMBER 14TH, 2018: Six years after Sandy damaged the tunnel and nearly three years after planning began, Andrew Cuomo, who has run the MTA since 2011, takes an interest for the first time and decides to temporarily halt L service to visit the tunnel with some of his friends.
JANUARY 3RD, 2019: Three weeks after visiting the tunnel, Cuomo announces that the MTA’s 3 years of planning are null because the shutdown will not happen and is actually unnecessary. The tunnel apparently is not (?) structurally unsound and instead of massive repairs they’re just going to install new cable racks.
In sum: Andrew Cuomo has been running the show the whole time, through fare increases, disasters, and steadily worsening service. I don’t know if the L shutdown is necessary or not. I don’t know if Cuomo’s plan will fix the problem or if it’s just a band-aid that will put the problems off until later when he’s not the governor.
I do know this: 400,000 people take the L train every fucking day and damage to this critical tunnel is a Huge Fucking Deal. Either we were lied to before, when we were told the shutdown was a necessary sacrifice, or today, when we were told it wasn’t.
In either case, Andrew Cuomo has been running this whole thing for a long time and whatever happens is his fault. Where was he when the MTA was planning this? Why did he wait so long to take an interest?
Based on my read of his plan–if you can call a powerpoint presentation a plan–this dipshit is putting off hard decisions for short-term political gain so he can look like a hero, and if he gets away with it we will pay down the line.
This is not a plan, and this whole process is an insult to the people of New York. This guy asked a couple of his buddies who have never managed a transit project to come up with something that sounds good so he could declare victory. This is not the seriousness that his high office deserves. This is not the seriousness that the people of New York deserve.
Either the MTA, which Cuomo runs, is grossly, criminally dishonest, or Cuomo himself is. Or both.
I look forward to more coverage of whatever bullshit Cuomo is proposing but this has been a disgrace and an insult to the people he has pledged to serve.